Early ACCESS is Iowa’s early intervention system (IDEA Part C) for infants and toddlers under three years old not developing as expected or who have a medical condition that can delay typical development. Early intervention focuses on helping parents and other caregivers so that you can support your child’s growth and development during everyday routines and activities.

Anyone can refer children under the age of three to Early ACCESS, including parents, family members, medical providers and childcare providers. If you are not a family member making a referral, be sure you have the family’s permission to contact Early ACCESS.

Why is early intervention important?

Research indicates that brain development is most influenced in the first three years of life.

A child’s brain will grow the most during the first five years of life, reaching 90% of its final size. Seven hundred new neural connections are made per second. These neural connections build a child’s brain architecture that is heavily influenced by the “serve and return” experiences they have with their primary caregivers and social environment.

When young children do not achieve the milestones linked to healthy development, they are at risk to do poorly in the early school years, putting them at increased risk for school failure, juvenile delinquency, adult mental health concerns and other problems.

Intervention is more effective and less costly when provided earlier rather than later in life.

Early ACCESS is a statewide early intervention system of services for families with children birth to three years of age that are not developing as expected.

Early ACCESS services are provided at no cost and is a voluntary program.

Watch this video to learn more about early intervention in Iowa. 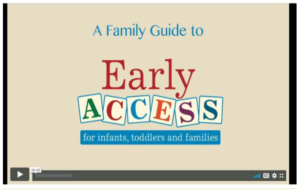 Before you can participate in Early ACCESS, your child must be determined eligible.

Early ACCESS is for children birth to three years of age.

In Iowa, children with certain diagnosed conditions are automatically eligible for Early ACCESS.

An evaluation may be completed by Early ACCESS to determine eligibility. A child is eligible for Early ACCESS if they have a 25% delay in one or more areas of development.  Areas include: talking, moving, seeing, listening, thinking, eating, or playing.  The evaluation uses information obtained from many sources, including information from you, an evaluation tool, observations of your child and review of your child’s medical records.

Early ACCESS service providers coach you, so you can help your child. They will:

You play a critical role in your child’s development. As part of the team you will: 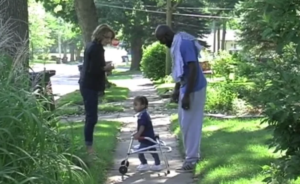 This 10-minute video, shows Early ACCESS service provider, Peg, on a home visit with Kiya and her father, Kris.

If your child is eligible for Early ACCESS, child and family assessments will be completed to learn about your child and what you would like your child to be able to do.

The Individualized Family Service Plan (IFSP) is developed by the IFSP team, which consists of a service coordinator, service provider(s), and your family.  Information obtained during the eligibility and assessment processes is used to develop the outcomes/goals you would like your child and family to reach while participating in Early ACCESS.

Once the IFSP is complete and you provide consent, early intervention service(s) can begin.

Your Early ACCESS provider might ask to record your home visit.  Providers record visits to help them learn. The videos may also be used during your home visit as a way to see what worked, problem solve, and to help you remember what happened so you can repeat it when your provider is not there. Here is a handout to describe the purpose of recording.

What parents are saying…

leaves that I’m doing it right and, and every day after that until she comes again I’m like, I don’t second guess myself.”

“I’m with my child 24/7 and with the proper coaching, I can do the same things all the time. Makes a big difference. I’m the one who’s going to make the biggest difference and this is something that him and I have to work on together.”

This video features an Iowa parent sharing why early intervention was helpful to her family.

As a parent, you and your child have rights.  We refer to parent rights as procedural safeguards.  The procedural safeguards apply to every aspect of the early intervention process, such as evaluation, access to records, and Individualized Family Services Plan (IFSP) team participation.  For example, you have the right to disagree with the results of the Early ACCESS evaluation that determined that your child was not eligible for services.  Or, if you are not receiving services as outlined in your IFSP, there are options for addressing that issue.

Early ACCESS is not intended to be a stand-alone program. Your child may need additional supports and services from other providers. One goal of Early ACCESS is to build partnerships with programs in health, education, human services, and developmental disabilities.

Research on child development grows rapidly each year. With each new study, parents and professionals understand children better and learn how to teach them more appropriately. The studies listed below highlight areas of current research from Iowa’s own research laboratories. Contact the research laboratories directly for specific information about findings from the studies.

Researchers from Hunter College, City University of New York and the University of North Carolina, Charlotte are looking to understand families’ experiences during pregnancy when they have a diagnosis that made them eligible for early intervention for infants and toddlers with or at risk for developmental delays or disabilities. We want to understand how early intervention programs might help families during pregnancy.

What Will We Do?
You will be asked a series of questions during a 45-60 minute interview. We will ask you about:

Who Can Participate?
Families who:

Department of Psychology: University of Iowa

This study examines the relationship between brain development and how children think using behavioral and brain measures. The study hopes to develop understanding of the brain changes that underlie aspects of development from infancy into early childhood, including key changes in perceptual development, language development, and decision-making abilities.

Department of Psychology: University of Iowa

This study examines how babies communicate and learn language. The study will work with monolingual English-speaking children with normal speech and hearing development.

Age: 14-24 month old babies
Activity: Babies will be shown a variety of toys to see how the infant communicates. After the interaction, the child may be shown the toys that she or he just saw, and may be asked some questions about those toys.

Department of Communication Sciences and Disorders

Researchers study children throughout the state of Iowa ages 4-9 that have difficulty with past tense ‘ed’ verbs. The study tests the efficacy of two different generally accepted ways of providing treatment for this disorder.

Age: Children with language impairment who are between 4 years old and 9 years old
Activity: 12 week intervention and therapy which tests ways to teach children grammar

It was the largest study ever done looking at short- and long-term impacts of childhood trauma. The study links childhood trauma with the adoption of serious health, social, and economic risks. It is now known as the Adverse Childhood Experiences Study.

Iowa is one of 19 states now measuring ACE data.

Results from the initial ACEs Study influenced many Iowa organizations, including Mid Iowa Health Foundation, the United Way of Central Iowa, the Iowa Department of Public Health, as well as many others, to form a taskforce (Iowa ACEs 360) and eventually implement an ACEs Study in Iowa. The study was initiated in 2012 as part of the annual Iowa Behavioral Risk Factor Surveillance System (BRFSS).

Check out the results of the survey at Iowa ACEs 360.

If you know of additional studies highlighting child development or developmental disabilities in children, please contact Meghan Miller at meghan.miller@idph.iowa.gov

Check out other resources and services for you and your family.